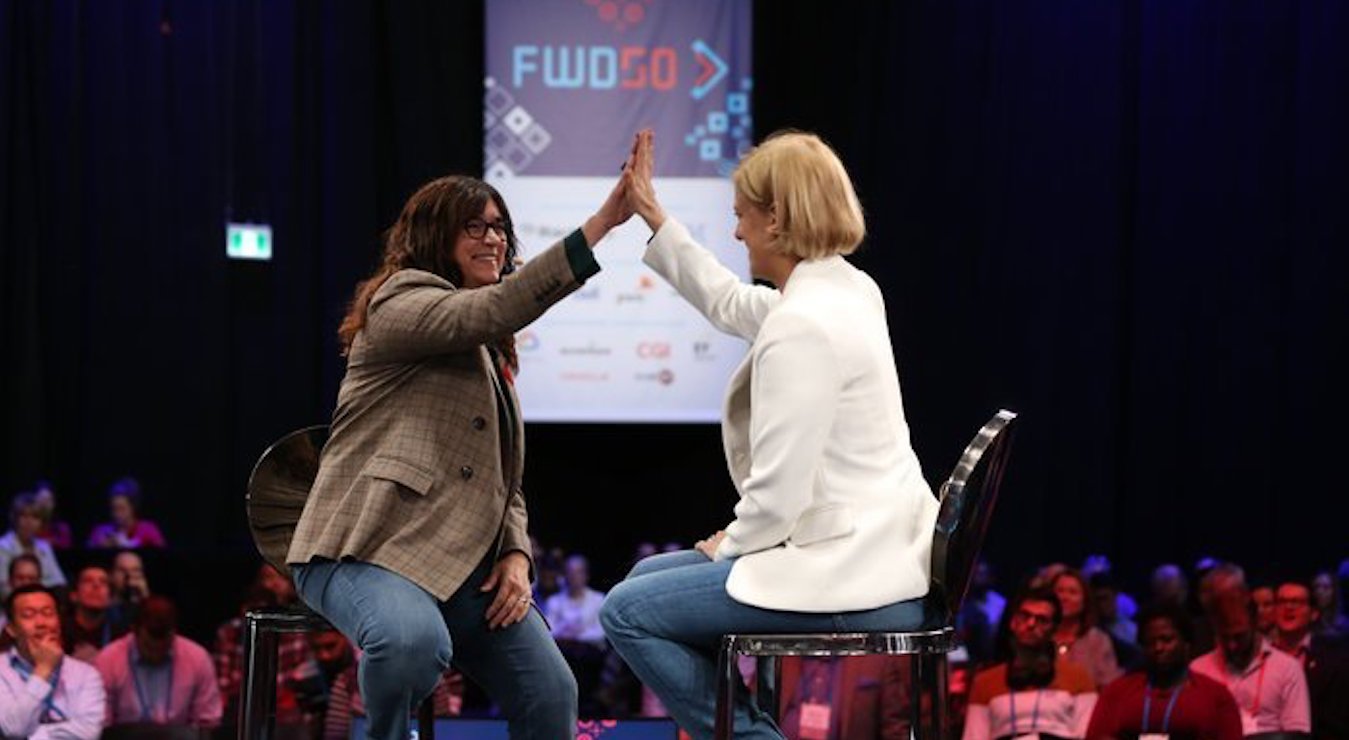 Embrase — the team behind Startupfest, FWD50, and Scaletech — has been running events for a decade. In that time, we’ve worked hard to ensure that the diversity we want to see in the world is represented on stage. But as Rebecca pointed out last December, the real challenge is that even when event organizers make their invited speaker lineup inclusive, they aren’t guaranteed that sponsors will do the same.

Sidenote: While we recognize that diversity has many faces, we decided to focus on gender representation because it’s where the disparity is most egregious — and most visible. But there are myriad other things we can do—from improving the availability of nonbinary washrooms, to creating spaces for worship, to encouraging people to bring their families (we had a ton of fun welcoming roughly 10 children onsite as part of Take Your Kid To Work Day.)

We know we’re far from perfect; we promise to listen to, and learn from, all feedback we receive, and to respond with concrete steps and changes to the way we run events. This program is just one such step—and the more we can do to bring everyone into the digital government conversation, the better we’ll make society.

If you’re disappointed with the speaker lineup at an event, take a quick look at where the speakers are from and whether their talks are invited speakers or were provided by a sponsor of the conference. This is one of the dirty secrets of commercial events. Last year at FWD50, for example, we had 48 percent invited female speakers. But we only had 19 percent sponsored female speakers.

People don’t like to talk about the sponsored talk problem openly, because it’s a tricky subject with many facets: The shortage of diversity in corporate boardrooms; the need to treat sponsors well so they’ll support the event; which employees at a company get speaker training or hold evangelism roles; and so on. Organizers that call this out can often step on their oxygen hose, unless they have supportive sponsors.

And we’re lucky to have a really supportive community.

With their help, at FWD50 this year we decided to tackle the issue head-on. To our knowledge, this is the first time an event has taken this approach. We’re sharing it here so others can borrow our language and terms, and hopefully seed this change across the event industry.

So late last year, we laid out in detail how we’d structure our sponsor contracts for 2019. We told sponsors that, if they had more than one speaker at the event, half of them had to identify as women.

Things went even better than expected

The results speak for themselves:

Here’s the language we included in all FWD50 2019 sponsor contracts, which sponsors were required to co-sign with us when they confirmed their support for the event. Feel free to use and share it if you’re putting together contracts for events you run.

When a sponsor supplies more than one speaker, we require that half of their total speakers are female as a condition of sponsorship. Here’s how we implementing this:

When this requirement is met, we’ll offer subsidized tickets totalling 10% of the sponsor’s fee to under-represented groups so that they can attend FWD50, in the sponsors’ name.

In the case that this requirement is not met, sponsors are required to donate an amount equal to 10% of their sponsorship fee to a nonprofit organization.

For FWD50, our chosen organization is Canada Learning Code, which works to ensure that all Canadians — particularly women, girls, people with disabilities, Indigenous youth and newcomers — have access to the knowledge they need to prosper in our digital world. We require proof of donation before the event takes place. At the conference, we’ll announce this organization, and the money raised through donations. Of course, we hope that in the case of a sponsor providing a single speaker who isn’t from an under-represented group, that sponsor will join us in raising money for a great cause as well!

FWD50 is for all. That means we want a diverse lineup, and we’re working hard to ensure that invited speakers come from all walks of life. You can help: When choosing your speaker, consider people from groups that don’t take the stage as often as they should — and join us in creating the open, accessible event we all want.

We look forward to a time when the stage — and industry — reflect the progressive society in which we’re fortunate enough to live. But that won’t happen by itself. With contractual policies like these, we can encourage our partners to make this change happen sooner.

We want to thank all the people involved in making this possible: Our sponsors, who participated enthusiastically in the initiative; Kelly Hutchinson from Edelman who worked with Sarah Paquet, EVP at Shared Services Canada and Deputy Minister Champion and Ottawa University to get tickets to the right people; and the Embrase team who worked with our partners to define terms that were meaningful but also flexible.

It’s hard to attract and retain skilled workers from science, technology, engineering, and math — particularly in government positions. We hope that this program will encourage more people to consider careers in digital government by featuring people from all walks of life on stage. But more than that, we hope we can serve as an example for like-minded organizations who want to fix onstage diversity.