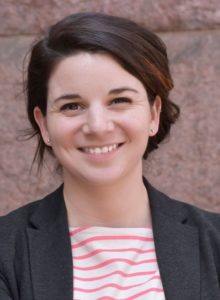 Leigh Tami is the Director of Data & Analytics for New York City’s Department of Parks & Recreation. In this role, she leads the agency’s data analytics, data science, and data engineering work, interfacing with both technical and operational teams to build data infrastructure and data products that help improve how Parks manages its work, people, and assets.

At the outset of COVID-19, Leigh led the rapid development of data collection tools used by both Parks and City Hall to track social distancing compliance, playground/park closures, and supply/mask distribution. During her tenure in this position, Leigh has built significantly on the agency’s existing data work, both expanding its internal use of data and public data presence.

Prior to holding this position, Leigh was Chief Performance Officer and Director of Cincinnati’s Office of Performance & Data Analytics. In this role, she led her team in the complete ground-up development of the city’s enterprise-wide data analytics infrastructure, integrating and centralizing previously siloed city datasets like police calls for service, financial data, 311 requests, and GPS data. She also led the City’s launch of both its open data portal and CincyInsights – an interactive open data dashboard portal that makes open data visual, consumable, and user-friendly for public data consumers.

In 2017, Tami was named the City of Cincinnati’s Employee of the Year, as well as to Top 25 Doers, Dreamers, and Drivers of 2017 by Government Technology Magazine. She holds a J.D. from the University of Cincinnati College of Law and B.A. in Theology from Xavier University, and is admitted to the New York State bar.

Join us for a nuts-and-bolts discussion on building a data-driven culture in one of the largest public parks systems in the country. In 2015, NYC Parks launched an agency-level Data Analytics initiative to transform the agency’s ability to solve problems and improve operations through the lens of data. Our speakers are Jacqueline Lu, the inaugural Director of Data Analytics at NYC Parks, responsible... read more