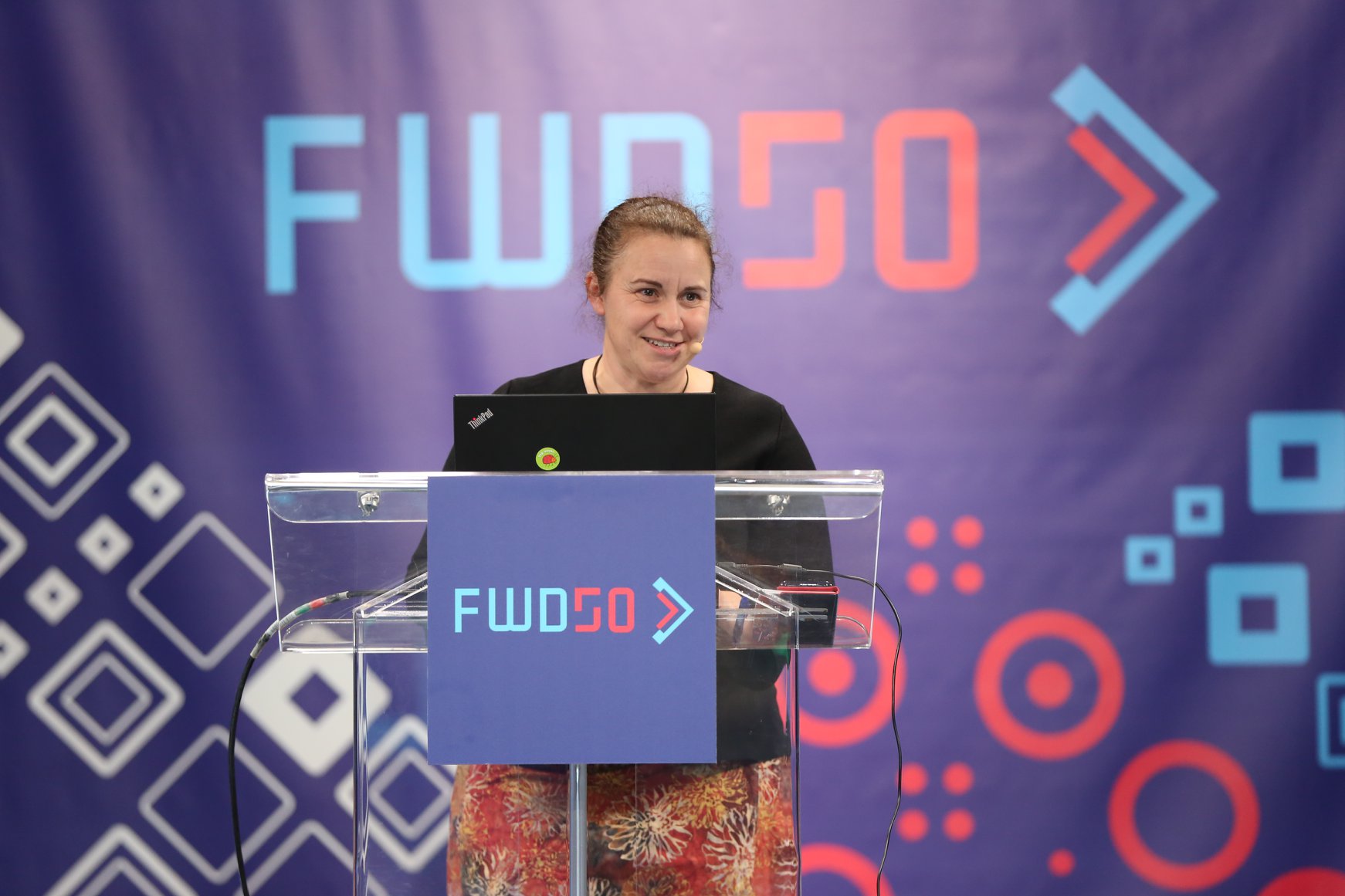 “Government as a platform is not just a technical thing or a geek’s thing. It is a strategic foundation for reform, for scaling impact.”

From the FWD50 2019 archives, we’re thrilled to share Pia’s reflections on 20 years of experience in driving transformational government.

You can see Pia’s presentation slides here, continue the conversation with Pia on Twitter and find all her articles on Linkedin.

Please see the full transcript of the talk below.

Hello, bonjour, hello. The very first thing I want to do is if I was in Australia, I would be, asking about the land and the country that I was on and paying my respects. So I do want to just start by paying my respects to the Algonquin people, nation, to their knowledge systems, to their leaders and elders past, present and emerging.

I think interestingly we work, I’ve worked in tech for 20 years, and I’ve been a geek for a good 35 years, cause my mom was a techie. And I think that bringing that humanity, that intersection of technology and humanity is absolutely critical to always remember. And the ground and the land and the history that we stand on is almost one of the most binding things that could bring us together.

Particularly some of those knowledge systems that are very, very [00:01:00] effective at thinking in ways different to us. So I recently left one of the governments that I’ve worked for, largely because the commute was too tricky from Canberra to Sydney all the time. But I thought to myself, what was the thing that would bring me most joy, to do just as a little thing while I’m figuring out what next?

And I thought, well, there’s so many conversations that I feel like I keep having over and over, and I want a chance to write them all down. So I undertook a very stupid and naive plot to write 20 articles in 20 days, 20 working days, about 20 years experience in preparation for 2020. Cause you know, I’m a numbers geek as well and I love that kind of stuff. So I did, my final article is going up  in a day. So I almost had it done in time for FWD50. But what I’m sharing with you today is the key insight from each of those 20 articles, all 19 of the ones that have been published [00:02:00] on LinkedIn, this deck, and you please welcome to go and check them out.

I’ve worked in public sectors for 10 years. I worked with public sectors from the tech sector for 10 years. I went into political office for two years, but don’t hold that against me, cause I wanted to understand this system and when I left the most recent gig. I realized that the thing I most want to do in the world is keep contributing to public sector reform cause not just about digital government. It’s about public sector reform to make us fit for purpose for the 21st century. So we can truly be that social, economic, and indeed technological platform. Upon which [00:03:00] society can thrive, upon which individuals can thrive, upon which culture can thrive into the future. So I’m going to share some insights.

Each of the  articles is quite long. and there’s a lot of insights for each article, but I thought I’d just share one from each for, for this discussion. So here’s all the articles they sort of fell into re-imagining government and doing government better as two sort of broad categories. And I’m not gonna obviously read through all those.

So you get an idea. So first article, the key insight was we need to design better futures. We’ve got to stop trying to predict the future or react to a trend. We’ve got to stop picking a winner and throwing all of our resources and intelligence at that problem. We’ve gotta to stop. Even though iteration is critical and taking iterative approach, you can’t iterate your way out of an exponential problem.

You can’t iterate your way out of a wicked problem. What we need to do is design what good looks like and then very collectively and collaboratively and collegially, and [00:04:00] by designing what good looks like, you create the possibility of then converging towards something better, not just something fundamentally better, not just something that’s addressing a pain point, but something fundamentally better. So that gives you a chance to not just accidentally apply shiny new things to existing problems in existing processes. Cause if we develop new legacy systems then that creates a problem.

Second insight. The future of service delivery isn’t websites or apps. It’s lots of other sorts of things. This whole article was trying to prepare people for the onset of personal AI helpers as probably the user centered service of the future.

The whole point though is if you imagine what a channel, like an AI, personal AI, looks like it gives a couple of opportunities. It gives you a chance to then think about how do we design and build the systems today, even if the front ends of website today where the front end can be changeable. Where the front end is adaptable to different channels, but your back ends can maintain that stability, that extendability. This is really getting to the heart of why modular, and gov as a platform architecture is so critical. But that’s my nerd side. But it also gets to the point of why we need to bring different ways of thinking. So. I bet you that one’s fast cause I’ve got two and a half minutes policy intense, better realized.

So policy transformation. I did a whole article about policy transformation and about the opportunities of shifting from linear to more agile and user centered approaches to policy. I’m sure a lot of people would find it fascinating how we took a very traditional policy team and with a short one month retraining session with two problem statements, we retrained them into being a policy lab and it has created [00:06:00] fundamentally better policy outcomes.

Systemic barriers. And if you don’t understand the account, work around them, you also can’t disrupt them. You also can’t evolve from them. We need better rules. So there’s a whole legislation there’s code and regulation and rules as code piece to this, which you’ll very much enjoy I think.

Gov 2.0, I said a whole piece about gov 2.0 because people sort of went Gov 2.0 10 years ago and then maybe we should be gov 3.0 and people kept getting all buzzy. The whole point of Gov 2.0 was to reimagine things. Not to just digitize. So I almost took people back to the, here was the original intent of Gov 2.0, we need to enable [00:07:00] innovation. We need to enable teams. We need to adopt servant leadership across all of our senior executive to get the many eyes, the many hands and many minds working on things. Exponentialism is our biggest challenge and we need to respond. We need to figure out ways to scale our impact, not just our resources. Otherwise, we will not meet that need. And if you’re throwing a hundred percent of your resources at a backlog, which is exponentially growing, you are just throwing your head against a wall. So taking 10% or 20% ideally 50% but even 10% of your resource and throwing it at how can we disrupt that exponential flow, is critical.

The last one’s going to have to be super fast, need to avoid minimum reactivism. We need to stop just throwing more resources at something and start thinking about many minds. There is a useful benefit of equally serving the three masters that are laid out in the Australian public service act, which are fairly common everywhere else.

The government of the [00:08:00] day, the parliament and the people. If you actively try to serve all three, you get an interesting stability from which you can serve them all better. Trust in public institutions is critical. So what’s the trust infrastructure look like for the 21st century? User centered services require user centered governance. We need to look at participatory governance properly. People are part of the solution, not just the problem. Government as a platform is not just a technical thing or a geek’s thing. It is a strategic foundation for reform, for scaling impact. We need to build the trust infrastructure. It’s a myth that just making it easy to buy stuff will solve problems.

If everyone could snap their fingers and buy stuff, we would sprint off cliffs. I can tell you now we need to have intelligence about what we buy, what we build, what we reuse. We need to differentiate between commodity things like an email system. Sure. Buy it off the shelf versus a taxation system. There’s not many taxation systems off the shelf. Or if [00:09:00] there are, they’re lying. So the notion that you can take things that are unique to the public sector, unique roles of the public sector and make them just do it with commodity is just insane and demonstrably not working for us.

I am a massive open data person, but I’ve also done a lot of the sensitive data work, analytics work, I’ve run all kinds of different teams. I am so sick of people saying we can do better services if we just share more data. It kills me because, don’t share sensitive data to get better services. Most of those services could be done through verifiable claims. Don’t ask me how much money I earn, ask me whether I meet the means test and then let’s get the taxation department to give me a verifiable yes, that person meets the means test rather than just sharing lots and lots of data. We don’t need to copy and paste data around government. We need to better use the authoritative sources to validate claims. There’s a whole thing there. And the unintended consequences of new public management. This is my [00:10:00] final article which is going up, I think tomorrow, and the small version of that article is things like functional segmentation.

So finally, what are your reflections? What will you do differently in 2020? And let’s make 2020 count. Thank you.